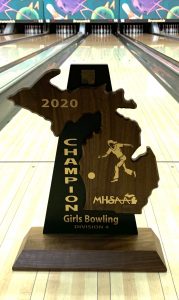 The girls Sabre Bowling team stamped their ticket to next weeks MHSAA State Bowling Championship by winning their 3rd Regional Championship in the past 4 years on Friday.

After the six baker games and two individual games the Sabres found themselves 101 pins out of first with one game to go. The Sabres buckled down and found their groove to overtake Oscoda by 116 pins in the final match giving them a 15 pin overall victory.  The Sabres will head down to Royal Scott Lanes in Lansing next weekend to compete in the MHSAA State Championship.

The boys team finished 10th in the boys division.

The Sabres still have more work to do as tomorrow is the Singles  Tournament at Lucky Jacks and we are hoping more of the girls and guys will stamp their ticket in Lansing.